How the wild card game felt in a pic. Credit: Michael Ainsworth, AP

Count me in the optimism camp, even if there is a damn reasonable critique the Seahawks should have shifted to less of a run-heavy approach by half-time against Dallas the way the offense was struggling.

Let’s review the roster by position group to see how well things improved from the troubling and scary preseason expectations of the team. In sum, almost all of the potential tsunami of uncertainty that faced the team before the season has calmed.

Russell Wilson had one of his best years in the NFL, 3rd in the league in passer rating and tied for 3rd in TD passes. He’s efficient and a big playmaker. Other than a pattern of sometimes holding the ball too long while trying to do too much, even with a better offensive line protecting him, he’s an elite, franchise QB. The only question is if they can extend his contract before he enters the final year of his current deal in September.

The elusive search for the heir to Marshawn Lynch is over. Chris Carson is an animal, 5th in the league in rushing, even while missing 2 games and splitting a lot of carries. Rashaad Penny proved a dangerous and talented 1-2 punch. Mike Davis has shown enough to the league he’s probably not worth paying in free agency now. Having Carson, Penny, McKissic, and Prosise (probably injured again, because why not?) for 2019 looks infinitely better than previous uncertainty.

Another position in flux leading into the season with the departure of Jimmy Graham feels exceptionally settled. Will Dissly returns after an exceptionally promising 4 game start to the NFL before injury ended his season. Nick Vannett led this group in 2018 playing time and has a comfortable place in the rotation. Ed Dickson was solid once he came off IR. That’s a very good 3 TE rotation on a team with an established identity of both playing big for the run *and* throwing to the TE (51 passes for 595 yards and 8 TDs in sum during the season).

Can you say stability? With the Tom Cable experience mercifully concluded, this unit looks, dare I say, cohesive and effective under Mike Solari. Brown at LT, Sweezy at LG, Britt at C, Fluker at RG, and Ifedi at RT as a possibility going into 2019 is better than any of us could have thought a year ago. Throw in the surprise power of Jordan Simmons and the versatility of George Fant to play 6th lineman/TE and this is a good unit. They could choose to upgrade in free agency and both Sweezy and Fluker are free agents, but the foundation and identity of this group that helped lead the league in rushing is as solid as it has been in the Russell Wilson era.

Really. Wilson had a perfect passer rating throwing to Lockett this season, with Lockett catching 57 passes of the 71 thrown to him, for 965 yards and 10 TDs (plus 4 catches for 120 yards last Saturday).

Baldwin battled injuries throughout the year, coming back to form down the regular season stretch and on Saturday to remind he’s an exceptionally valuable, clutch player. 2017 7th Round pick David Moore emerged with 26 catches for 445 yards and 5 TDs. Pete Carroll raved about undrafted rookie Malik Turner’s growth during the season so expect the team to cut Jaron Brown to save $2.75 million in cap space. Yes, he had 5 TDs, but only 14 total receptions.

Either way, Locket, Baldwin, and Moore look like a great leading trio given the makeup of the team. 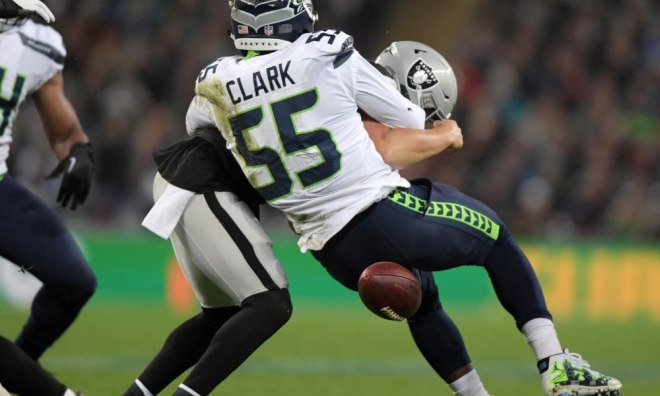 This unit was a huge question mark with the retirement of Cliff Avril and the departure of Michael Bennet. Man, did Frank Clark and Jarran Reed deliver.

Clark had 14 sacks, 14 tackles for loss, and 4 forced fumbles. Reed added 10.5 sacks and 12.5 tackles for loss. Clark is a free agent headed to a big payday, seemingly with Seattle given what he, Carroll, and Schneider have said about the matter.

The subtly effective DE/DT Quinton Jefferson is likely to return as a restricted free agent.  The emerging Poona Ford, an undrafted rookie DT who just kept getting more and more snaps as the season progressed (including 34 on Saturday) joins Naz Jones and Rasheem Green as a promising, youthful trio to round out the rotation of a unit that will likely add more talent in free agency, if not the draft.

As Bill Murray said in Groundhog Day, “I’m a god. Not THE God, but a god.” Bobby Wagner could say the same. Another All-Pro year in 2018 added to a likely Hall of Fame career. The only downside? He and Russell Wilson are on the same contract schedule as members of the (stunning) 2012 draft.

Can the Seahawks re-sign Clark, extend Wilson, extend or re-sign Wagner, *and* pay now-free agent KJ Wright what the market will offer for a top tier, at times Pro-Bowl linebacker…all while addressing other needs? Eh, seems challenging. And they already played most of this year without Wright anyway.

Feels like a position the Seahawks keep the All-Pro stud and surround him with economical and emerging talent; especially with how often nickel and dime packages in the modern NFL take linebackers off the field.

Was there any position with more uncertainty after the implosion of the Legion of Boom? Richard Sherman left with his undies bunched up tighter than Bill Belichick’s smile. The great Kam Chancellor was forced into retirement in all but official name by injury. And Earl Thomas was a toddler playing in an All-Pro’s body once he showed up…at least until he busted his leg again and flipped off the team on his way out the door. Like hell a team that prizes team chemistry and cohesion is bringing back free agent Thomas after that series of shenanigans.

And who would have thought a secondary of Shaquill Griffin, Tre Flowers, Bradley McDougald, Tedric Thompson, and at times Delano Hill, would have been…decent. Even above average (at times). And capable of some big plays.

McDouglald in particular is a huge value as an inexpensive free agent re-signing before this year. Griffin seems to have improved with the pressure of playing lead CB after Sherman’s departure (though he was clearly challenged playing on a sprained ankle on Saturday). Flowers is a 5th round rookie, converted to CB from safety, and potentially headed down the same path of other defensive back finds the Seahawks have mined in the 5th round under Carroll & Schneider: Sherman and Chancellor.

Nickelback Justin Coleman performed well and is likely a re-signing target in free agency. Akeem King draws raves from Carroll after the Seahawks found him in the dustbin of other teams practice squad discards. And while Carroll’s clock management late in the half and stubbornness about the run can be frustrating at times, the dude has a helluva record finding and developing great defensive back talent.

Definitely a position the Seahawks will add to in the offseason, but infinitely more stable and with cause for optimism than when the Seahawks kicked off last season in Denver.

Y’all. Michael Dickson was an All-Pro punter in his *rookie* year. What a find.

Sebastian “what, this is tackle football?” Janikowski was middling at best and seemed to fade in the 2nd half of the season. And a kicker wrecking their hamstring on a field goal attempt isn’t much of a surprise since it looks like he eats a whole pizza at half time and hasn’t had a good fitness regimen since he got pubes. I guess the hunt for a kicker may be on again.

In sum, a potential wayward, wreck of a team to start the year enters this off-season with some questions, but that’s normal for a modern NFL roster. They also have a goodly amount of cap space (though with some big paydays to manage too) and a solid foundation across essentially every position group, where they can choose to complement or enhance, rather than rebuild or reconstruct.

This chart is a useful tool to predict where the Seahawks might focus their off-season capital given Pete Carroll’s clear philosophy of relying on a good (if not great) defense.

Yet, given where this team was headed into training camp last summer, I’ll take it. With a smile on my face.