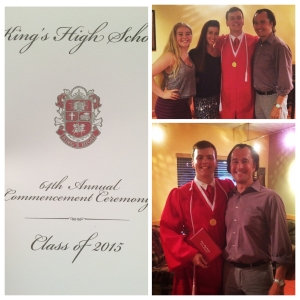 My son, Joseph, graduated from a private college prep school last week, the same one as me. His story is probably not what you expect. It’s part of why I love him the way I do.

His graduation ceremony acknowledged family connections to the school, including 2nd generation students like him. There were several of those in his graduating class, with a big difference: those kids’ parents were almost all graduates in the 80s, even the 70s. For Joseph, they noted that I graduated in the class of 1993. There’s a reason for that.

Joseph was born to two parents who didn’t know what the hell they were doing.

My now lovely bride discovered she was pregnant with Joseph after going to the hospital on the heels of miraculously escaping serious injury in an ugly car accident in the summer of 1996. She was 19 at time. I was 20. I was in between my junior and senior years at college in Virginia. Stephani lived near Seattle, where we met. This was neither planned nor ideal.

We made it through my senior year near the end of the era when long distance phone calls existed, cell phones and email did not. We had a brutal scare when Joseph was almost born way too early when I was home over Christmas break. Stephani was on bed rest from there until when Joseph was born. I wasn’t there for the birth on February 26, 1997. All of that sucked.

I came home after graduating and got a job as a Congressional staffer (pretty much like being a starving graduate student). Stephani and I moved in together and got married on March 28, 1998. Life was not easy.

We were figuring it out as we went, with our own individual problems, the financial challenges of a young family on a small income, and the stress of parenthood all colliding. We started having kids young, so we decided to finish having kids young too. Joseph’s sister, Sophia, was born on September 23, 1999.

We were flawed, but we made our kids a priority. Joseph has gone to private school from preschool through today. My God, that hasn’t been easy. While we tried hard, we were far, far from perfect parents…which is the whole reason Stephani and I had cause to have life-changing transformations in the summer of 2013. Those serious flaws certainly didn’t help either of our kids in their own growth and development.

Along the way, we didn’t pay enough attention to some warnings that Joseph was having problems despite generally good grades. Early in 6th grade, the wheels started coming off the bus and he was diagnosed with ADHD. His behavior was fine, his organizational skills were a walking disaster. The rest of 6th grade, and junior high, required a lot of hands-on attention from us that was time consuming and often brutally maddening, as fellow parents of kids with ADHD will attest.

Joseph was never a natural athlete. He played soccer a bit when he was young. He finally found a niche in tae kwon do. He became a black belt, which in retrospect foreshadowed his future toughness and dedication. In junior high he started playing football. Politely, he wasn’t very good.

To his fortune, King’s High School is a no-cut football team. They’re a perennial state play off team now. You turn out, you make the team. You might not play much but, you’re on the roster. That’s pretty much what Joseph was facing as a freshman.

Head Coach Jim “Shap” Shapiro said of my son that from that point “Joseph set out to be the best Joseph he could be.” Shap said that after Joseph’s senior season when he was receiving his 2nd straight Coach’s Award for being exactly the kind of stellar teammate a coach and other players want (which is a testament both to Joseph’s character and hard work as well as to Shap’s leadership of that program that turns boys into young men like nothing I’ve ever seen). Joseph went from having little business being on the team to starting on the offensive line in the playoffs for a squad that went to the state quarterfinals. He was a team captain the night of his last game. I’ll never forget that.

Meanwhile, we steadily took our hand off the till with Joseph’s school work. Long, frustrating, nightly sit downs to review homework, organization of his notebook, and other basic tasks eventually evolved into the simple, normal: “did you do your homework tonight?” He’s graduating from that prep school with a 3.4 GPA. He took AP courses and classes like Physics. He’s a history geek (like me). He’s incredibly smart…and his grades would have been higher if he remembered to turn in his homework!

Here’s what counts: that kid who was born in less than ideal circumstances, to two flawed parents, who suffered with ADHD, who isn’t a blessed athlete…is an absolutely amazing person.

Yes, he is. He is that kid. In spite of the challenges he faced. And now he’s that man.

That’s my boy. And I love him more than words can describe