We have an elf on the shelf in the Earling household. It’s a mischievous little punk, who entered our home last year and brought joy to the parents of the home and dismay to our son, Joseph.

If you’re friends with my lovely bride on Facebook you’ve perhaps seen some of the carnage. Stephani introduced Pixie the Devil Elf to Joseph last Christmas season, pretty much to torment the boy. Since that time, Pixie has had some interesting adventures, met an unfortunate demise, and now the charming tale has taken an unexpected turn.

Here’s a chronological summary in pictures, in the finest tradition of naughty, inappropriate…and hilarious, uses of Elf on the Shelf: 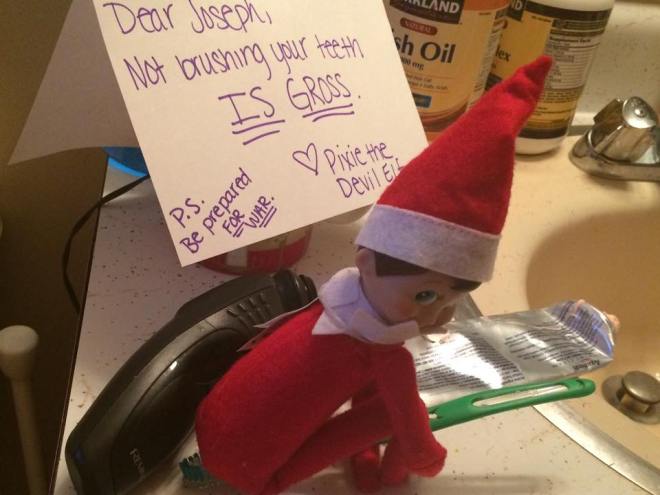 Pixie the Devil Elf appears during last Christmas season with a public service announcement about brushing your teeth, which Joseph is prone to forget. 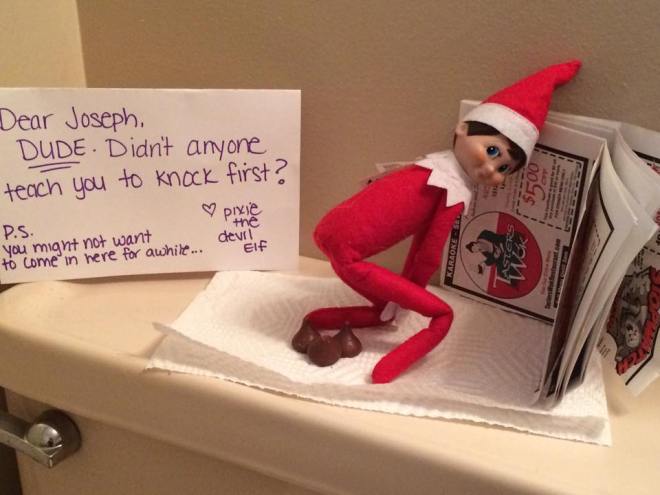 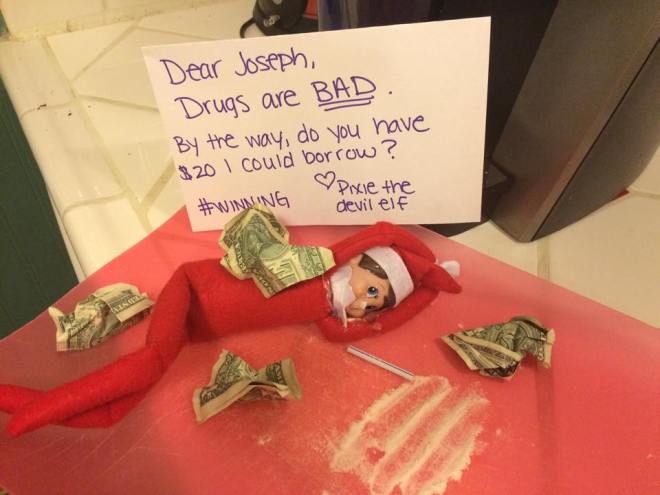 Pixie explains, in a fine homage to Charlie Sheen, that drugs are not the answer. 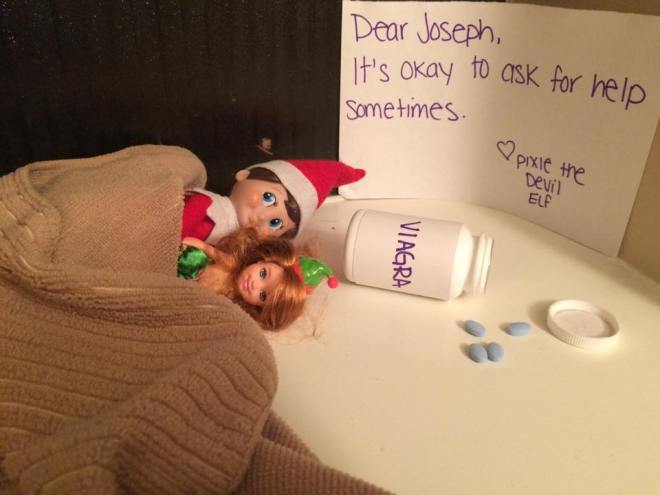 Pixie encourages honesty, in the most vulnerable of moments.

Pixie offers some prudent thoughts on the treatment of the opposite sex. Also, I think he wanted a lap dance.

Seriously, I think this was the one that triggered Joseph to seize Pixie, which we had to barter back from him. 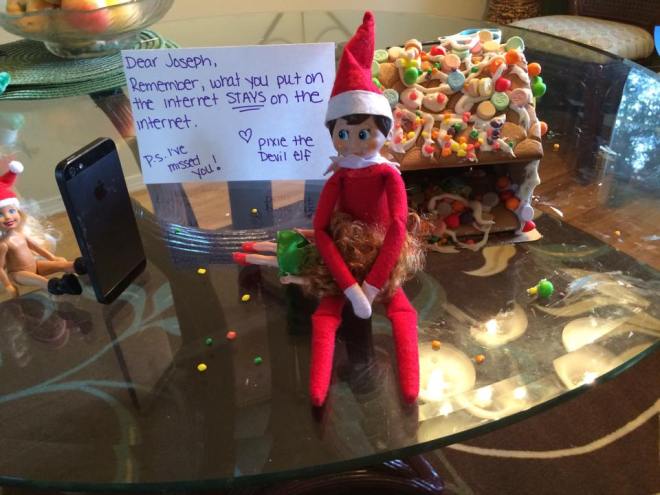 Pixie returns from his unexpected captivity with a lesson of incredible import in the age of social media. Yes, that is a gingerbread house behind him.

Oh, and we had to barter for Pixie’s return again.

And in the spirit of homicidal… 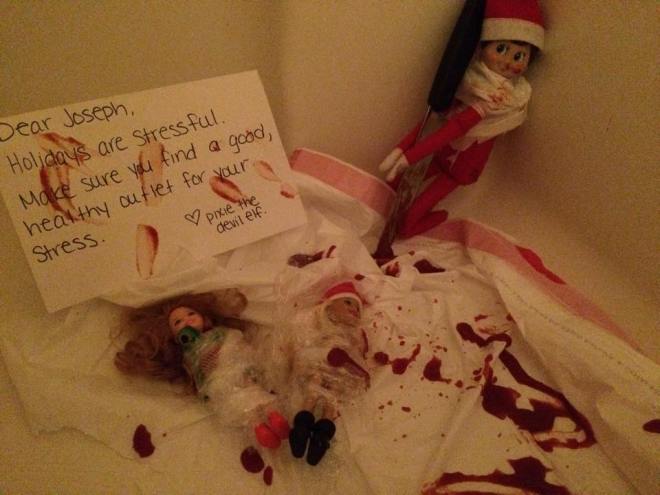 Pixie’s 2014 Christmas swan song was this remake of a scene from the show Dexter, where the main character solves murders…and commits them, you know, just to release some stress now and again.

I had to steal Pixie back from Joseph’s thieving hands after this one.

At which point, unbeknownst to Joseph, Pixie went into hibernation, only to return as Joseph arrived back home from college in Montana for Christmas break. Here’s what he found waiting for him in the fridge when he got home in the middle of the night late last week, searching for food after a long drive home: 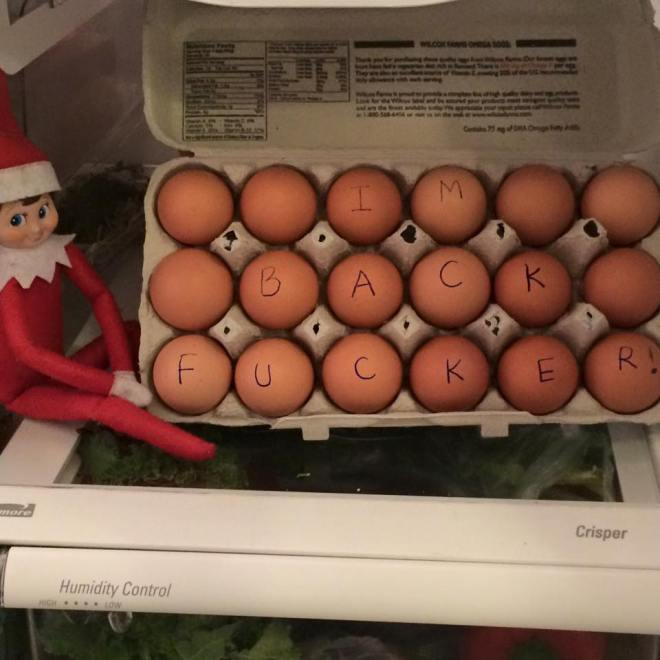 Pixie welcoming Joseph home as only the Devil Elf can.

Here’s where the proud parent portion of the tale comes in, because this was Joseph’s response: 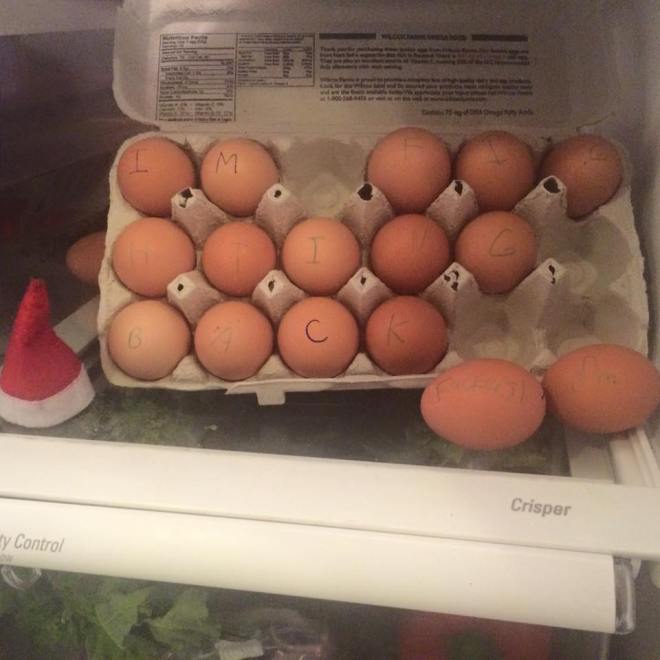 Tough to read, but Joseph re-worked the eggs to read: “I’m F’ing Hitting Back Fuckers!” …with a middle finger drawn on the egg at lower right.

Pixie, minus his hat left standing next to the eggs, was gone. And this time there was no bartering him back. 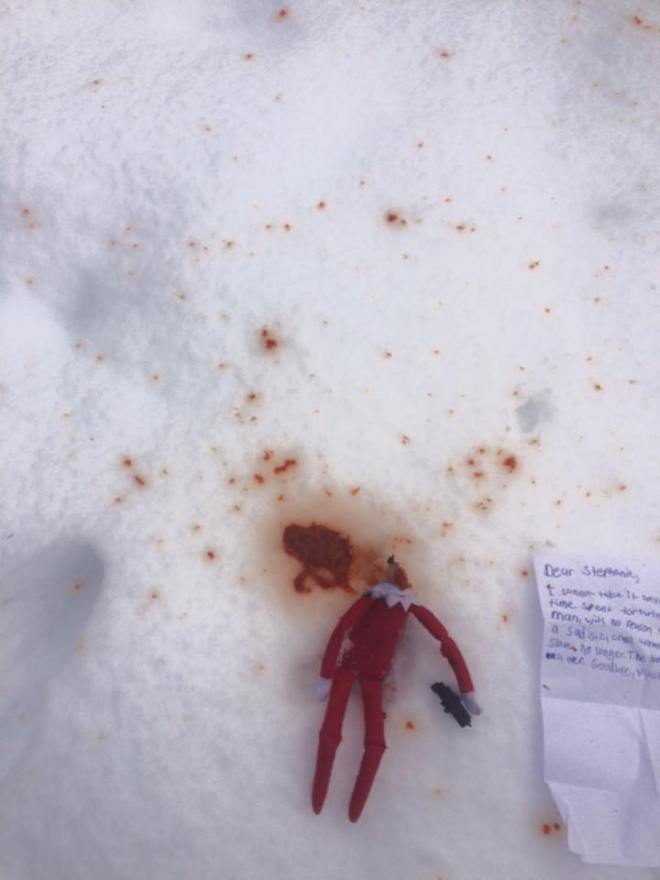 Joseph blew Pixie’s head off while out shooting with some friends, with a taunting suicide note from Pixie, making reference to the “sadistic” torture of the poor boy being too much for Pixie’s conscious.

And, really, Pixie was toast. 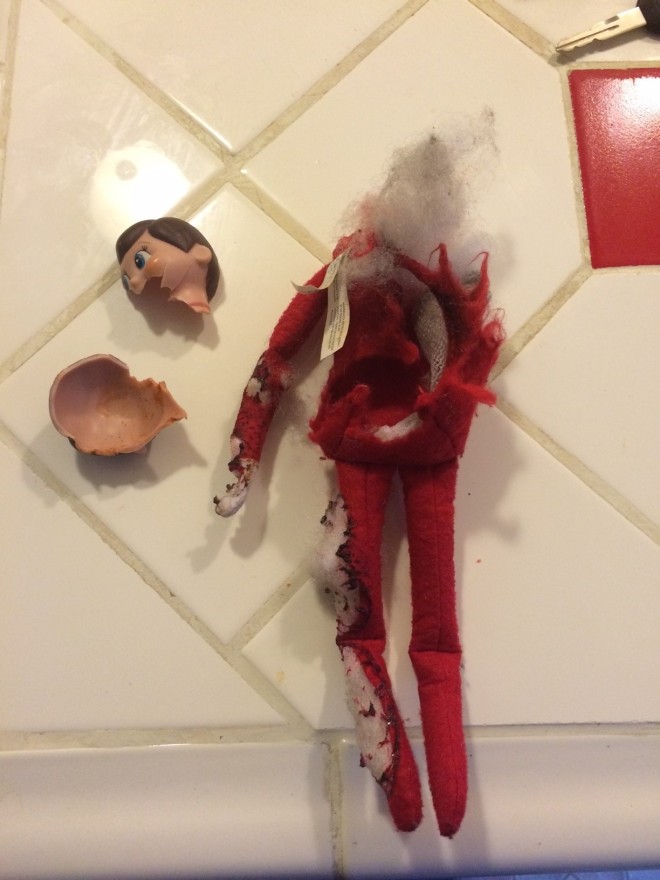 Pixie got blown to smithereens.

There was really only one parental response to this escalation: 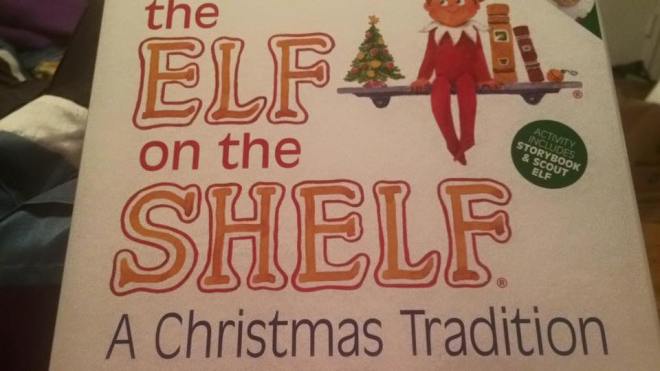 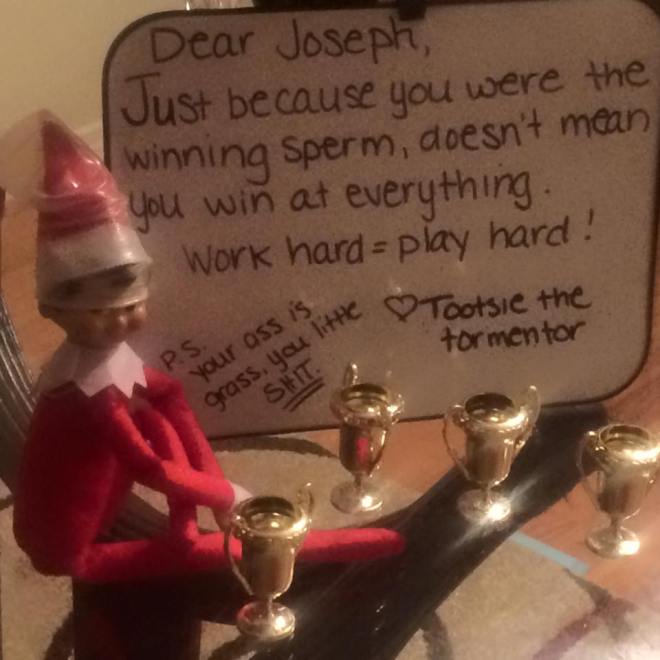 The introduction of Tootsie the Tormentor, with an important lesson about staying humble in life. And yes, that’s a condom on his head.

The key to Tootsie’s survival given Joseph’s, uh, decisive response to Pixie’s re-emergence is quite simple. Stephani sets up Tootsie’s latest torment. Takes a picture. Disassembles the gag. Then sends Tootsie into hiding for about 24 hours…before texting a picture to Joseph and posting it on Facebook.

Despite this constraint, Tootsie is indeed hard at work: 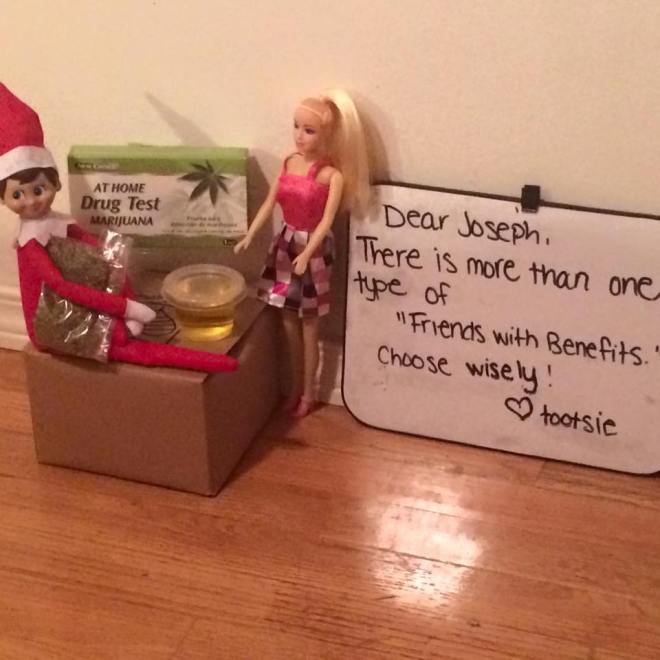 It seems Tootsie understands quite well the challenges of modern life. Sometimes, you just need a cup of clean pee to get you through that drug test.

What comes next? Tale to be continued and I’ll report back here on Tootse’s antics to include the holiday season!

In the meantime, Merry Christmas!