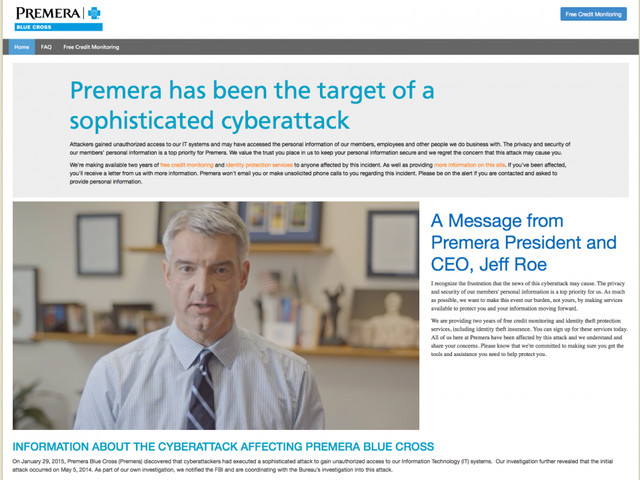 The power of visualization. Reality or bullshit? I say reality.

Usually when people talk about it, they think about athletes visualizing the performance they want, especially elite athletes, such as Olympic medalists or top tier professionals who spend significant time on their craft beyond just the traditional training of the body to achieve greater things.

I say we should be applying it in all our lives. It’s powerful. It also takes time, something most of us don’t feel like we have. How to bridge that gap?

Here’s one tale of where I applied visualization, and intention, in my professional life at one of the busiest, most stressful times in my career. Many of my friends or professional colleagues in health care may remember it.

On March 17, 2015, my employer at the time, Premera Blue Cross, announced it had been the victim of a “sophisticated cyberattack,”  affecting roughly 10 million current and former customers and employees. I was the Vice President of Corporate Communications at the time, on point for leading the communications of the announcement and serving as executive spokesperson.

It would have been a big story by itself, but was coming just weeks after the 800 pound gorilla of Blue Cross Blue Shield insurers, Anthem, announced they had been hit with a cyberattack affecting over 80 million people. We knew that proximity would amplify national attention on our announcement as part of a possible trend.

The weeks between the discovery of the attack and the announcement were condensed, fast-paced, and stressful as the small team of executives and others who would implement the announcement pounded through what needed to be done with the assistance of our outside Legal team and crisis communications counsel, all in a highly confidential environment. Those weeks are among the most intense I’ve experienced as a professional.

One of my challenges was balancing all that with the three things I needed to accomplish in my role:

Leading the communications work was one thing. There was a lot of hands-on activity because of the small knowledge group aware of the issue, including invaluable guidance from our superlative legal counsel on the issue (thanks Ted Kobus!). Our biggest challenge collectively was the bone-crushing amount of work to be done in a short time to be ready to launch. To this day, I owe a debt to Nicola King on my team for her performance in the weeks leading up to announcement day.

Providing counsel to the executive team was also a manageable challenge requiring only an incremental increase in my typical job. Working with executive-level professionals has been part of my entire career, something I’ve grown into and enjoy. The stakes were high on this one, but comfortable.

That last need of serving as executive spokesperson had some exceptionally high stakes. Our company’s reputation was on the line, both broadly as well as specifically with our largest customers – including names like Microsoft, Amazon, and Starbucks. How the announcement went, right out of the gate, would have a big impact on how the company’s reputation — and business — fared moving forward. And the potential legal ramifications of the whole affair, including how we handled the announcement, were massive.

The corporate spokesman element is where I knew my energy needed to go. Not because I wasn’t up for it. I’m effective on camera and with the media. It’s a skill honed throughout my career, and shaped by several rounds of great media training (thank you Scott Stanzel!). The stakes of this were bigger than anything else I had done professionally, including federal privacy laws requiring our announcement be a press release in every media market in the country because of the scope of those impacted.

As the announcement day approached, my attention increased on those spokesperson duties, in part as the expansion of the knowledge group in the closing days before launch allowed others to handle tactical preparation and execution of key elements of the multi-audience effort, including some great work by my internal communications team led by Dana Robertson Halter. That’s when my intention and visualization process ramped up.

My role was both complicated and simple. Simple in that I was the executive spokesperson for the company for any and all news media, including print, radio, and TV. Complicated in that the daunting reputational impact of the issue paired with the significant legal ramifications required some serious finesse to say what the company could to inform those affected while also protecting our reputation, avoiding harming our legal position, and all while staying within the bounds of what federal law enforcement allowed us to say given their active involvement due to the particulars of the attack.

Because of the pace and volume of work, I had to be exceptionally purposeful about the time I spent visualizing and setting intention of what the executive spokesperson role would look like. I also had to do the work itself: honing messaging, sitting through briefings and joining executive discussions to understand the issue, then practicing — including on camera — so that when the time came, what I needed to know and say was locked and loaded in my brain. With all those professional responsibilities, my family, working out (important stress relief!), and being in yoga teacher training (an ill-timed coincidence that thankfully concluded days before the announcement), my time was had to be severely rationed.

Thus, it was more periodically putting a stake in the ground than spending hours like an elite athlete visualizing. Example: the announcement was on a Tuesday. During my early Monday morning gym workout that week I checked-in on Facebook, declaring “I will destroy this week!” Almost no one seeing that would know what it meant, but I was intentionally putting it out into the universe.

Another example: the announcement was scheduled for noon on that Tuesday, selected in part to allow for smooth tactical execution of a simultaneous announcement to millions of people in different audiences we’d be reaching. I arrived at work at about 7 am, Eminem’s “Monster” blaring on my headphones as I swaggered into the Executive Boardroom that had been converted into our war room for the announcement effort. Those actions were all on purpose. I was pumping myself up for the day.

I was the first to arrive in the boardroom that morning. The headphones stayed in to keep the music pumping, even as I went through some deep breathing exercises. I sat at the conference table for a bit, not working. Looking out the windows. Mentally visualizing. Preparing myself with more focus than any athletic competition in which I’ve participated, even collegiate swimming.

I had a number of tasks to accomplish that morning, including leadership functions to prepare and support others to do their jobs: radiating calm to mitigate the stress of others and show belief in their ability to execute, even as many of them found out first thing that morning what had happened, what we as a company would announce that day, and what they needed to do to support that effort. Intermittently through all that I was visualizing. Visualizing with admittedly the cheesiest of examples.

If you’ve seen the movie “Speed” you might recall the scene when the hijacked bus driven by Sandra Bullock has to approach a gap in a freeway ramp over which it will have to leap to the other side. If you remember the scene, you may recall as the bus approaches the gap, the law enforcement vehicles accompanying the bus during the hijacking episode peel off one-by-one, away from the bus, whose passengers must approach the unknown alone.

That was me. No one else would be in front of the inevitable deluge of TV, radio, and print reporters on the phone. I had to perform. When my company needed me most.

I would visualize that scene in “Speed,” then visualize myself walking out the glass doors into the lobby of our corporate headquarters as I went out to face the media that would come after the announcement. Just like the bus leaping over the gap on the freeway, I would step out those doors alone.

When that time came to walk down the stairs and through those doors, I actually had a smirk on my face and my heart and mind were calm. It was time. I was ready, and I knew it. That’s what visualization can do.

I killed those interviews.

All four TV stations in Seattle. A non-stop stream of interviews via phone with radio and print outlets, both national and local. From noon until our management call at 5 pm to sum up the day for the company’s leadership – many of whom learned the news themselves that morning given how tight our security protocols were – I was on. In the fastest, most intense flurry of media relations I’ve ever experienced.

I had to be. When the Wall Street Journal is peppering you with questions on the phone, when NPR is taping you for news to go across the country, when TV cameras are lined up to interview you, one after the other…there is no choice: bring your best.

The unexpected result? A flurry of messages from friends and professional colleagues elsewhere with a thumbs up. Not just “hang in there,” but praise. Including from fellow PR pros, whose complimentary words I appreciated more than they know. A fellow executive had a former communications colleague reach out to him to say in part, “I don’t know who your guy is, but he’s doing great out there.”

I think that’s because I visualized myself performing well, on top of doing the work to be ready for it.

The point, however, isn’t the praise – though I remain deeply grateful for it. The point is that’s what visualization and intention-setting can do. That’s the lesson. It can bring out the best in you and what you’ve built to create, even when you don’t have hours to spend time on the visualization itself.

There are lots of resources to explore the topic at a more basic level, as well as taking a deeper-dive of the connection between quantum physics and human thought. Whether for sports, your professional life, or even personal, I recommend it. Highly.

Today, I’m staring down some big changes in my life that are significant and in some ways life-altering. What am I doing? Visualizing what I want, in the middle of grinding through the work to get through those changes.

Good luck on your own visualization path. May it help you succeed, mightily.