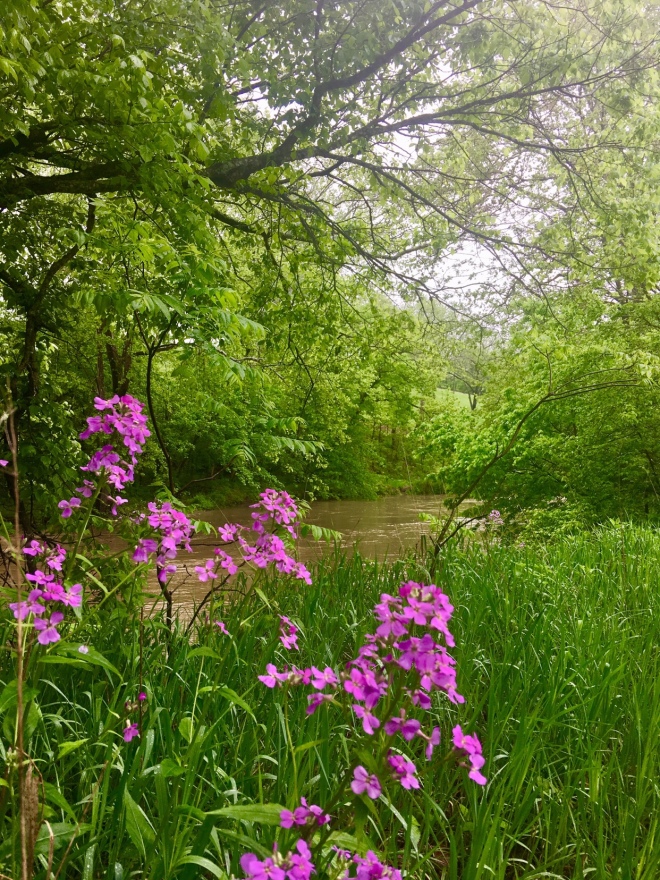 Antietam Creek rolls by gently in the rain. A scene of beauty, just yards from terrible fighting at Burnside’s Bridge in 1862 as Union troops forced a crossing under heavy Confederate fire on America’s Bloodiest Day. A visual symbol that hope and beauty endure.

I’ve been a Civil War-history nerd for as long as I could remember.

I checked out related books so often from my elementary school library that a librarian once stopped me with one book to say I had checked it out too many times in a row. I pointed out no, those other entries were from earlier in the year. This was only the 2nd  in a row this time!

In third grade I gave a presentation on the Civil War. It was supposed to be a couple minutes. It turned out to be more like 20. And it was good enough my teacher took me up to the high school to give it to an honors American history class.

And the tales of my history nerdom go on, though uniquely focused on the Civil War. I was and am a history nerd, with the awards to prove it, but the Civil War was always my area of deepest interest, even expertise.

What was the source of that deep interest?

There are many potential reasons. I’ll give you one. And a vulnerable one at that.

Something inside me has been trying to explore something I had already lived.

I had the distinct feeling during my recent visit to Gettysburg that I had been there before this lifetime.

Am I talking about reincarnation?

Why did I leave Seattle to attend college in Fredericksburg, VA…with its campus on a famous Civil War battlefield?

Why have I been most truly at home when living in Virginia and Louisiana, with a special love for warm Southern evenings?

Why when I have studied Civil War history and visited Civil War battlefields have I always been consistently and inexorably drawn to the Confederate experience?

It could be just chance.

But, as I’ve written before, I don’t believe in coincidences.

I’m not a resolute believer in reincarnation, including in all its Hindi forms. But, my evolving faith and spirituality includes acceptance of the reality that our world — as Einstein articulated — is made up of energy. And that energy can exist and be transformed in ways we as humans don’t fully understand.

Yet, I grew up in a faith that would slam the door shut brusquely on such ideas. It’s uncomfortable in much of Western society to espouse belief in such things. People that believe strongly in it are often viewed as kooks, loons, and perhaps unwell. We’re a society that historically has hastily rejected ideas that challenge our dominant (and comfortable) thinking, sometimes even in the face of evidence that might challenge that accepted paradigm.

The Earth isn’t the center of the universe. Slavery is not ok. Women should have equal rights. One ethnic group isn’t superior to another. The Chicago Cubs can win the World Series. Shit, Donald Trump got elected President.

And maybe, it’s ok to embrace our inner kook sometimes.

Yes, I am a Civil War history nerd, in a big way. That’s the good side.

The bad side: if I did fight and die in the Civil War, I don’t believe I was on the side of righteousness. That draw to the Confederate side and affinity for things Southern means I most likely fought on the side who in the annals of military history is known for fighting admirably…on behalf of the very worst of causes. Slavery.

Admirably? Yes, based on the skill which Confederates fought on the battlefield, not because of the heinous cause for which they fought. Students of war know this. The audacity of Robert E. Lee and Stonewall Jackson as well as the toughness of the Southern solider in the face of incredible odds are studied parts of military history (and yes, while some Union leaders and soldiers come in for praise too, it’s not in the same way).  For example, some World War II German military commanders have discussed in memoirs their study of the Civil War, in particular Confederate strategy and tactics, as part of the training that made them — with deep irony — also highly capable, famous soldiers, closely studied in military history…fighting for one of the most despicable causes in our modern human story. Nazism. 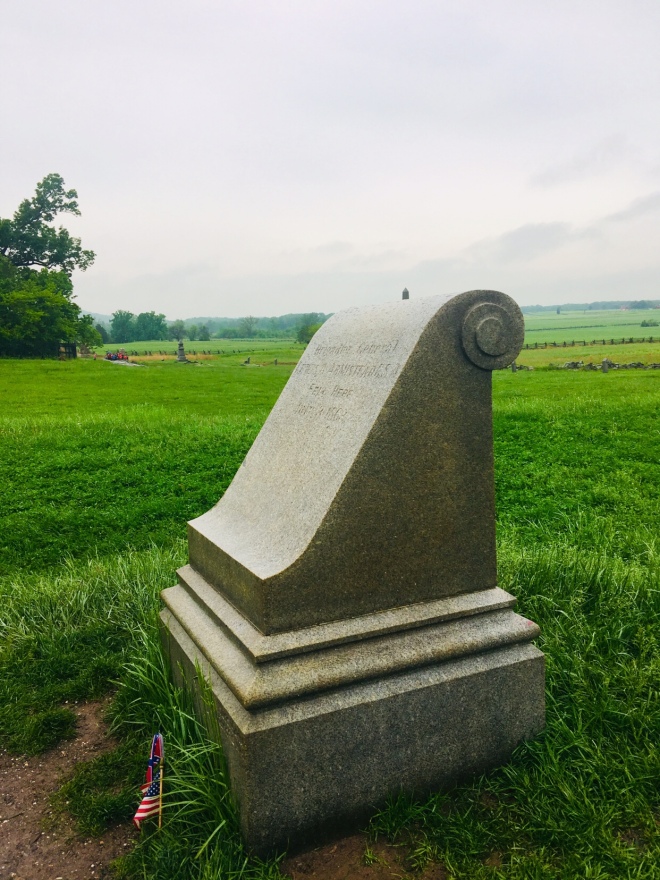 The place where Confederate Brigadier General Lewis Armistead fell, mortally wounded, moments after briefly piercing Union lines at the climax of Pickett’s Charge on the last day of Gettysburg. The marker looks West over rolling fields where thousands fell dead or wounded in the battle that marked the turning point of the Civil War.

Maybe all of that is why today, living in the heart of the South, I have developed a special, burning passion — even righteous anger — for the topic of reforming our criminal justice system. The goal: eradicate the latent racism and bigotry that still lurks in our society decades after the end of Jim Crow and some 150 years after a hellish, death-filled Civil War to resolve our country’s original failing. I have sins for which my soul aches to atone.

All of that isn’t very comfortable.

I could try to bury all that inside me. But, that would require me lying to myself. 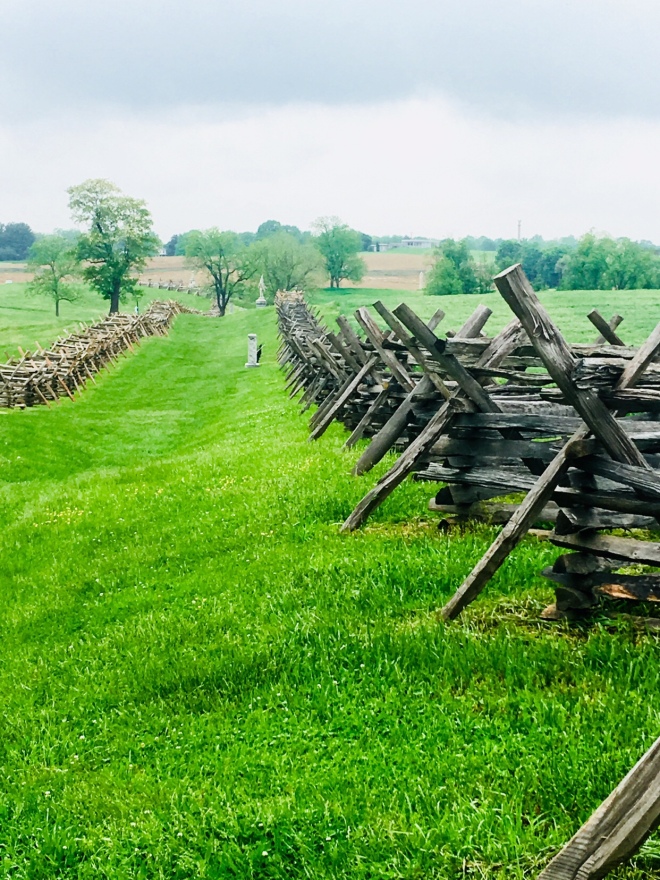 The Bloody Lane. A simple, sunken country road, turned into a blanket of dead and dying men, fallen in savage fighting at the Battle of Antietam.

You tell me though why I find the fields of Antietam so deeply haunting.

You tell me why I spontaneously almost burst into tears recently driving onto the Gettysburg battlefield.

You tell me why my heart physically aches with sorrow as I stand on those fields.

You tell me why the conjuring of very specific scenes of military conflict in my mind sends deep, reverberating chills up and down my spine until my hair stands on end. 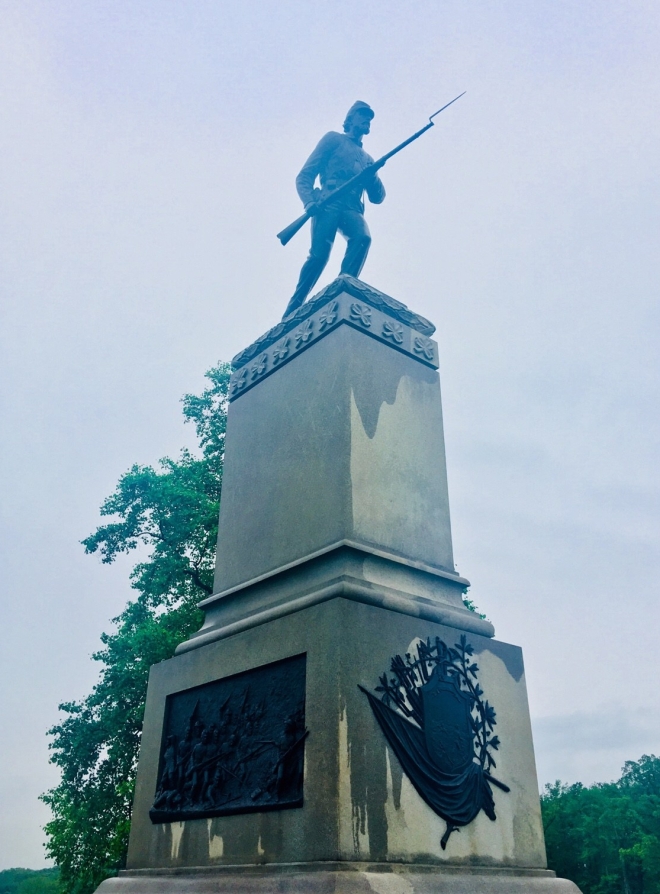 A memorial to the 1st Minnesota, ordered from this spot to launch a desperate, hopeless charge to buy time for Union lines to reform after a successful Confederate attack on the second day of the Battle of Gettysburg. 216 of the 262 men in the unit became casualties during the attack. The highest casualty rate of any Union regiment in the war. The Union line held.

Maybe you’ll just say I’m weird (…and I’m more than a little ok with that).

If there is one thing perhaps you take away from this tale though, whatever you think of the details, maybe it’s this: don’t be afraid to unburden your soul. To say what you think, especially in the face of facts, experiences, and gut instinct that conspire to point in one direction…even when much of society might not be comfortable with it.

Maybe why that’s why I’m willing to broach the uncomfortable topic of reincarnation, and let you deeper into my soul, whose experience may have involved fighting for the most hideous of things.

Because we are both the good and bad inside of us. The question is what we do with that.

Can we recognize the good and the bad? Without recognizing both, the bad will serve as a drag on the good like a weight chained to your ankle.

Recognize the bad. Unburden your soul. Then go chase the good with everything you have. You will be happier, and the world will be better for it.

2 thoughts on “That time I was in the Civil War”