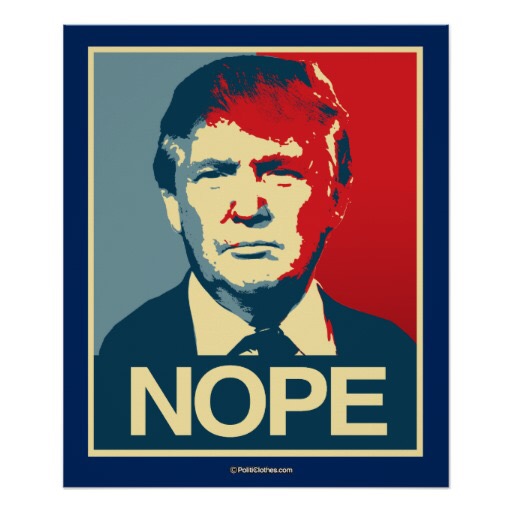 Sometimes you have to draw a line in the sand and hold to it. The consequences may become unpleasant, muddy, and at times painful. So be it. Holding to principle and respecting your own integrity may require it.

Donald Trump is just such a line.

My thoughts on the Donald are already in writing. Put more succinctly: no fucking way.

I’m a Reublican who will never vote for Donald Trump; #NeverTrump to the end, and proudly so.

My previous post on the topic provides the case for those interested in rehashing the many reasons to oppose the short-fingered vulgarian. The animating reason remains this: he is wholly unfit to occupy the Oval Office.

I worked for a Republican US Senator and a Republican President, in sum for nearly 10 years. Almost a quarter of my life.

I worked for them because I believed. Not that they were perfect, they weren’t. But for whatever faults the public perceived, they were honorable men. Men of intellect. Men of principle. Men of dignity.

Donald Trump is none of those things.

Man or woman, of any political affiliation,those attributes should be a basic requirement to serve as President  of the United States.

I will neither vote for Hillary Clinton. While not the same threat to the Republic as Trump, her flaws are also too many. I’ll vote 3rd party or pass on over the race for President when voting.

Why? Especially when it comes to the Donald, I can’t look my kids in the eye and say “yes, you might not agree with the President but respect them and their team. They serve our country.” I worked for George W. Bush. And I respect President Obama and his team for their service, politics aside.

Not with the Donald. Not with his ego-uber alles approach to life.  Not with his clown show of thugs, sycophants, and the grammatically inept around him.

Let us respect instead the people in Congress and the Courts who will serve as a necessary check against the excesses of a Trump Administration. A Clinton Administration reprise would likely be only a milder, less tabloid headline-rich version of the same.

And for God’s sake, let’s do better in 2020. Republican and Democrat alike.