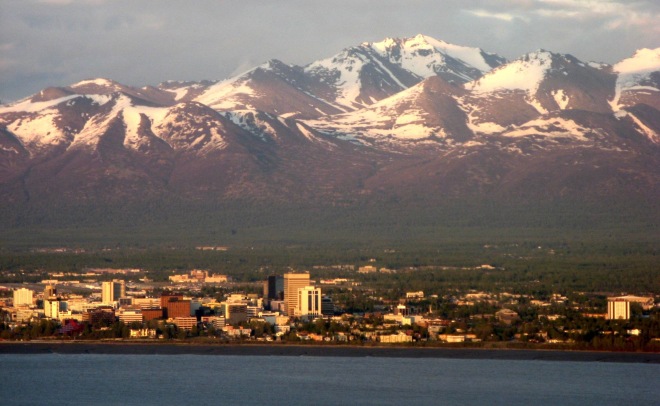 The Chugach Mountains rise out of the forest surrounding Anchorage.

Our country is beautiful beyond words. Donald Trump and Hillary Clinton can’t change that.

“Beautiful” is probably not what comes to mind when you think of our singular national event this year: the Presidential election.

The phenomena known as the candidacy of Donald Trump is anything but beautiful. Perhaps intriguing in its defiance of the known laws of politics…basic decency, the remotest sense of competence, coherent intellectual thought, etc. But, definitely not beautiful.

And if there was no Donald Trump, Hillary Clinton would be Donald Trump, the major party candidate with astronomically high negative ratings. No beauty there either.

I’ll tell you what’s beautiful about America. The diverse, majesty of our country is beautiful. Something neither the madness of Donald Trump nor the deplorableness of Hillary Clinton can take from us.

I’m on a plane from Anchorage to Seattle as I typed most of this, completing a turn and burn trip for work. Meanwhile, I’ve been travelling to New Orleans in preparation for my move there. I’m getting a fascinating view of our nation. And if there are two more different parts of country than Louisiana and Alaska I’m open to offers, but you’ll have trouble making the sale.

There’s something you should know about Alaska: it’s big. Gigantic. Huge. This geography geek’s visual proves the point. When you say your state is big, Alaska laughs, pats you on the head, and says “bless your heart.”

Even a simple trip to Anchorage proves the point. Look out the window of the plane riding over the coast of southeast Alaska on the way north and you can’t miss it. Mountain after glorious mountain. And I mean mountains.  Not what passes for mountains east of the Rockies.

Mountains. Covered with snow and glaciers throughout the year. Majestic. One after the other. Row upon row. Rising towers of rock above the earth. Like something out of Lord of the Rings (Tolkien geeks: think of the scene in the Return of the King when the beacons of Gondor are lit to summon aid from Rohan).

Everything is bigger in Alaska. Even the mudflats where sea meets land can range for hundreds of yards, with their own network of rivers and channels. And the forests. Green upon green, for as far as the eye can see. Covering the landscape, including huge islands where no human treads, no road roams. Where miles of pristine beach stretch untouched, for lack of humans to reach them.

A view out a building of even modest height in Anchorage shows all these things. The ocean. Mudflats. A sea of trees. The glorious mountains of the Chugach, in near inconceivable proximity to a major US city. Hovering over life on the edge of the world.

And the edge of the world it is. Even as there is much further north to travel from Anchorage to the reaches of Alaska, far to the coasts of the Bering Sea, the desolate North Slope, and the deep isolation of the soaring mountains, endless forests, and sprawling tundra of the Bush. Even in Anchorage, you know you’re far from the rest of the country.  On this last trip to Alaska of several I have taken for work I noticed for the first time: a Blockbuster Video is still in business.

Even a short distance from Anchorage by car can show you the edge of the world, such as the majestic Turnagain Arm, a fjord-like intrusion of water into the heart of mountains that spring from the sea. Mountains that when you ascend near the top to view the world your heart will nearly crack with wonder at the glory of this creation in which we abide.

What I’m describing is not the United States many of us know. It’s unique. Different. And so very, far away.

In Anchorage you know you’re far from everything else. Over 3 hours by plane, sharply northwest from Seattle, itself in the far northwest of the Continental US. Anchorage is a modern city in one of our United States. Yet, it is an outpost. The urban hub in a place where the state capitol (Juneau) has no paved road leading in and out because of its geographic isolation. Home to industries of oil and natural gas as well as the harvesting of sea life, where people live by extracting natural resources for the care and feeding of the distant, congregated masses of the nation.

Life in Alaska is hard. You can see it in the people. They look the part. Rugged. Weather-worn. Tougher than many of us care to know or understand.

People assembled to perform that extraction at the hard edges of the world. People living in conditions most of couldn’t tolerate year around. Extreme weather. Extreme daylight and darkness. Extreme isolation.

The buildings in Anchorage tell you life is hard. The country is beautiful. The buildings of the city are not. Many are downright ugly by many standards. They’re not built to be pretty. They’re built to protect you from the weather and to allow you to do what you need to do indoors.

In strong contrast, the buildings of New Orleans are endlessly beautiful. Not in a brand new construction, everything is in splendidly perfect order beautiful. In bright, bold colors with indescribable historic charm and glory that delights just as much as the raw physical beauty of Alaska. It is the oldness of the soul, nestled in the Deep South, as Alaska is to the newness of the soul we explore the ends of our world.

In New Orleans, there is a magic, woven into the layers of the historic, beating heart of the city. To be in the Big Easy is to understand this. To understand the lovely compilation of the old South and the rest of our nation. And when you find it, it will call to you. Call you to a place where there is always a party. A parade. Costumes. Beads. Always something to celebrate in this thing we call life in a community that will offer you a friendly embrace because that’s who they are.

You will find nothing of the sort in Anchorage. No such never-ending party. No such colorful joy. But, you may well find something else  in Alaska: a bold, majestic natural beauty that may speak to your soul and call you deeper into its reaches.

This is the dichotomy, and beauty of our nation. From Anchorage to New Orleans, and everything in between. We’re Americans.

We are a glorious, diverse lot. We live in a beautiful country.

A country with a system of government delightfully (and mercifully in light of this year!) designed to de-centralize power. A President Trump or a President Clinton is not likely to be pleasant.

But, there is only so much they can do.

While our national visit from the fuck-up fairy seems rather severe right now (and indeed it is!), Trump or Clinton have to deal with Congress and the Courts whom our Founding Fathers intentionally desi1gned to thwart the designs of power-hungry leaders. Thank you Madison, Hamiltion, et. al.!

Even as we inevitably put that separation of powers to the test, we can also take comfort in knowing the ugliness of our politics will not permanently harm the beauty of our nation and its people. From the natural glory of Alaska to the eclectic assemblage of humanity in New Orleans. There’s nothing a horrific and lamentable Presidential election can do to change that.

2 thoughts on “We live in a beautiful country, my friends.”